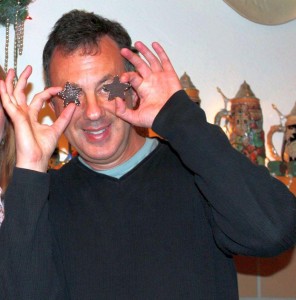 My name is André Perman. This blog is a collection of quirks and amusing things which I’ve come across in my years of work as a Danish Linguist.

Working for generally English-speaking companies my title of “Danish Linguist” reflects what I am perceived to be adding to the mix. However, probably the most challenging aspect of my work is that of being an English linguist.

As we say in Danish: “the sweet child has many names”… Localization, L10n, Internationalization, i18n, translation… A linguist’s work (for a US company) usually involves text originally in English, translated into a target language and then reviewed for accuracy, appropriateness and tone. It is often not until we see the text in the target language (in my case Danish) that we realize that the original English could be misunderstood – and was.

So mostly this blog is about English sentences which I or my colleagues have rescued from being mistranslated. Usually not because of poor translation skills, but because the original English was ambigous. Or often internationalization professionals only see a sentence out of context, – and without a context strange things can happen. Hopefully the examples here will serve as educational anecdotes for those responsible for writing internationalizable, good English and for those responsible for localizing it. Typically the difficult sentences have words which can both be verbs and nouns in English, contain English grammar that is either correct, but not well known, or just incorrect, or words that sound or look similar to other words, -and if they can be misunderstood, they often are :-).

The art of localization could definitely benefit from a mark-up language which identified, in case of doubt, whether a particular word was a verb or a noun and allowed for marking up of other aspects of a sentence potentially causing ambiguity.

So, in spite of the name, this blog will be mostly about English, although occasionally quirky Danish will also be quoted. It’s all for fun.

And the name “Rotten Danish” was chosen of course partly because of my Danish affinities, but also exactly for all the ways in which it is ambigous:

Is it a Hamlet reference (“there’s something rotten in the state of Denmark…”)?
Is it talking about the Danish soccer players who beat your favorite team?
Are we talking about Grauballe Man, the 2000 years old mummified body of an Iron Age Dane found in a peat bog in 1953?
Or are we referring to some baked goods, aka. danishes, going bad?
Or is there a live rat involved some place?

Yes! Only two words, and so many possibilities…
Enjoy. And join the conversation.

The Danes have actually been to space. First, many Danish companies provided software and equipment to NASA and the European Space Agency, maybe most prominently Christian Rovsing A/S back in the 60s and 70s. In 2015, Andreas Mogensen spent a week in the International Space Station and became the first (and so far only) Danish astronaut. This, of course, was predicted by the hilarious Danish full-length cartoon comedy “Rejsen til Saturn” (Journey to Saturn) from 2008 based on an earlier comic book of the same name.

But, of course, this is not the kind of space, we want to talk about here… Our space-challenge at hand is about whether a space should or should not be inserted between two Danish words. The issue has risen in urgency since the invasion of the English language and its handling of two nouns next to each other, where the first noun actually acts as an adjective describing the other noun. Things like “winter shoes” or “work clothes” are two words in English, where in Danish, since they naturally belong together, they become one word: vintersko and arbejdstøj. Like the Americans would say: “some things just belong together, like peanut butter and jelly”, where Danes take the consequence of that and make “peanutbutterandjelly”. Just kidding! -Every Dane knows that jelly goes on cheese and not on peanuts. 🙂

So, writing Danish with some knowledge of English grammar is firstly challenging in regards to whether to separate the words or not (when in doubt, you’re probably right going with a compound word in Danish). The second challenge is purely of Danes’ own making: after you’ve smooshed the two words together, you should also be able to pronounce the resulting word. Yes, some times two words just don’t become one word without putting up a fight. This is typically solved by inserting an extra ‘s’ if, for instance, the first word ends in a vowel and the second word also starts with a vowel. But if the insertion or omission of an ‘s’ produces a new legitimate Danish word , then things get funny. You can produce a brand new word that still has meaning, -just not the meaning you intended.

We caught a few of those one-letter bloopers in a previous posting. Here’s a collection of some further one-letter-off or one-space-too-little golden nuggets:

Skifte tid ==> to change time
Skiftetid ==> shift-hours, duration of a work shift
Skift tidsplan ==> change time schedule (skift is here a verb, so no compounding)
Skiftetidsplan ==> shift-schedule (dash – is there because otherwise ‘shift schedule’ is ambiguous in English)

In 1986 a group of performance artists actually on purpose tricked the Copenhagen magistrate to give them a permit for fællespisning, where of course the magistrate believed that they were approving a fællesspisning, as this newspaper clip shows: 🙂