The word “Close” is hard to translate without context.
In English it can mean both to shut something down, be near something or someone, or to successfully finish a sales negotiation. Of course this opens up a plethora of pitfalls for the diligent linguist/translator, even in-context:

“Close the deal!” was translated as “Luk handlen!”, which can be understood as “Shut down the business!”. 🙂 It should have been something like “Få Ordren!” or “Luk salget!” (i.e. “Get the Order!”).

“As close as you can” was translated as “luk det så godt som du kan” (“close it as well as possible”). The correct translation would be “så tæt på som muligt”.

“It is close to my heart” ==> “det er mit hjerte nær”. Interestingly when we go “poetic” in Danish we like to reverse the word sequence. Saying “det er nær mit hjerte” would be a geographic description of something located near my heart, with no emotional content.

Close, but no cigar!
And what about “Close, but no cigar!”: what would be a good translation of this Idiom into Danish? Maybe “Lige ved og næsten slår ingen mand af hesten”? (“Close-to and almost does not knock any man off his horse”).
Erik Moldrup has compiled a very impressive list of English-to-Danish idiom translations at: http://lakjer.dk/erik/engelsk/enidiomstb.html . But “Close, but no cigar” is not amongst them. Ahem… close, but no cigar…  🙂 I will ask him for advice.
There’s also an impressive list of Danish proverbs with explanations (in Danish) at: http://da.wikiquote.org/wiki/Danske_ordsprog
and a corresponding one of English proverbs in English: http://en.wikiquote.org/wiki/English_proverbs 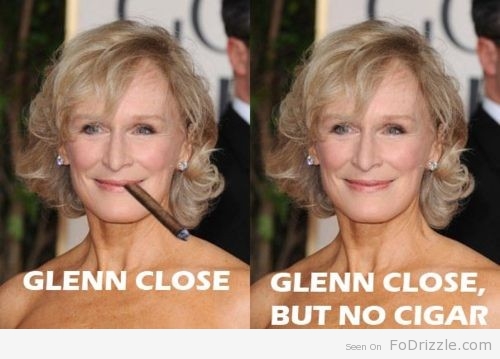 If the Danish prince Hamlet gave the English language the immortal sentence: “To be or not to be?”, so does modern-day English give us the wonder of “Now, know that first now is not the same as the last now, you know?”. Behold now, honored reader:

In the English sentence “Now, follow these steps to confirm your bank account” the word “now” actually does not mean “now” as in “this very instance”. It’s a filler-word more meant as a gentle nudge, or pause in speech, and synonymous (in this context only) with words as “next” or “please”. Or, another way to look at the uniqueness of this “now” is to realize that while the sentence above sounds pleasant and non-alarming, removing the comma and moving the “now” couple of places to the right results in the sentence “Follow these steps now to confirm your bank account”, which obviously expresses more of an urgency and somewhat of an alarm. And, interestingly enough, placing the “now” at the very end of the sentence further enhances the sense of urgency: “Follow these steps to confirm your bank account, now”.

And, of course, we have to note then in this context that in Danish, “now” does not have a double-life as as a filler-word. For Danes “now” means -ahem- now. Starting a sentence with “now” causes a sense of urgency in a Danish reader, so a direct translation of the original sentence with a leading “now”, would convey in this case the meaning but not exactly the spirit of it. In Danish, we have two words at our disposal: “Nu” means “now” (as in “this moment in time”). “Nuvel” is the Danish word we use, when we need a filler-word to let our mouth continue, while our brain pauses. It more or less is equivalent to the English “well, now..”.

And a propos, there was a very famous Danish radio- and tv-personality who so abused the word “now” in his live radio transmissions starting with the 1936 Olympic Games in Berlin and all the way through 40s, 50, 60s, 70 and 80s, that the Danish word for “now” (Nu) was forever ‘added’ to his name as little gentle mockery and a Danish sign of respect (Danes, being generally reserved and easygoing people, are not very good at direct praise 🙂 ). Gunnar “Nu” Hansen (1905-1993).
And since he could talk and talk (which of course you had to be able to do as a sportsradio reporter) also a line of licorice flavored throat lozenges was named in his honor: Nu Sportspastiller. His picture was on the outside and a collectable picture of a Danish soccer-star was always inside. The line of lozenges was discontinued in 1977.

As people buy more and more on-line, and as web sites get localized accordingly, we’ll probably see more confusion between “net purchases” and “purchases on the net”. I caught it when the English sentence “Cardholders will accumulate Reward Points based on net purchases on the cardholder’s account” was translated into Danish as “Kortindehavere akkumulerer præmiepoint baseret på internetkøb på kortindehaverens konto”, i.e. that the Reward Points would be accumulated based on the amount of internet purchases, rather than the correct “net purchases”, meaning: “purchases minus returns”.